Political and social changes left their marks on the immovable heritage in the Idrija region. This is especially true for the First and the Second World War that have left war trails, frontier forts, cemeteries, etc. that remind us of the painful recent past.

An assemblage of wooden cabins serving as a kitchen, engine room, composing room and bindery. Built in 1944. The printing shop has its own power station. During the eight months of its operation in wartime, the Slovenia Printing Shop printed 313 various prints in more than 1.3 million copies. The Partisan Daily was the only daily newspaper to be printed by a resistance movement in Europe. 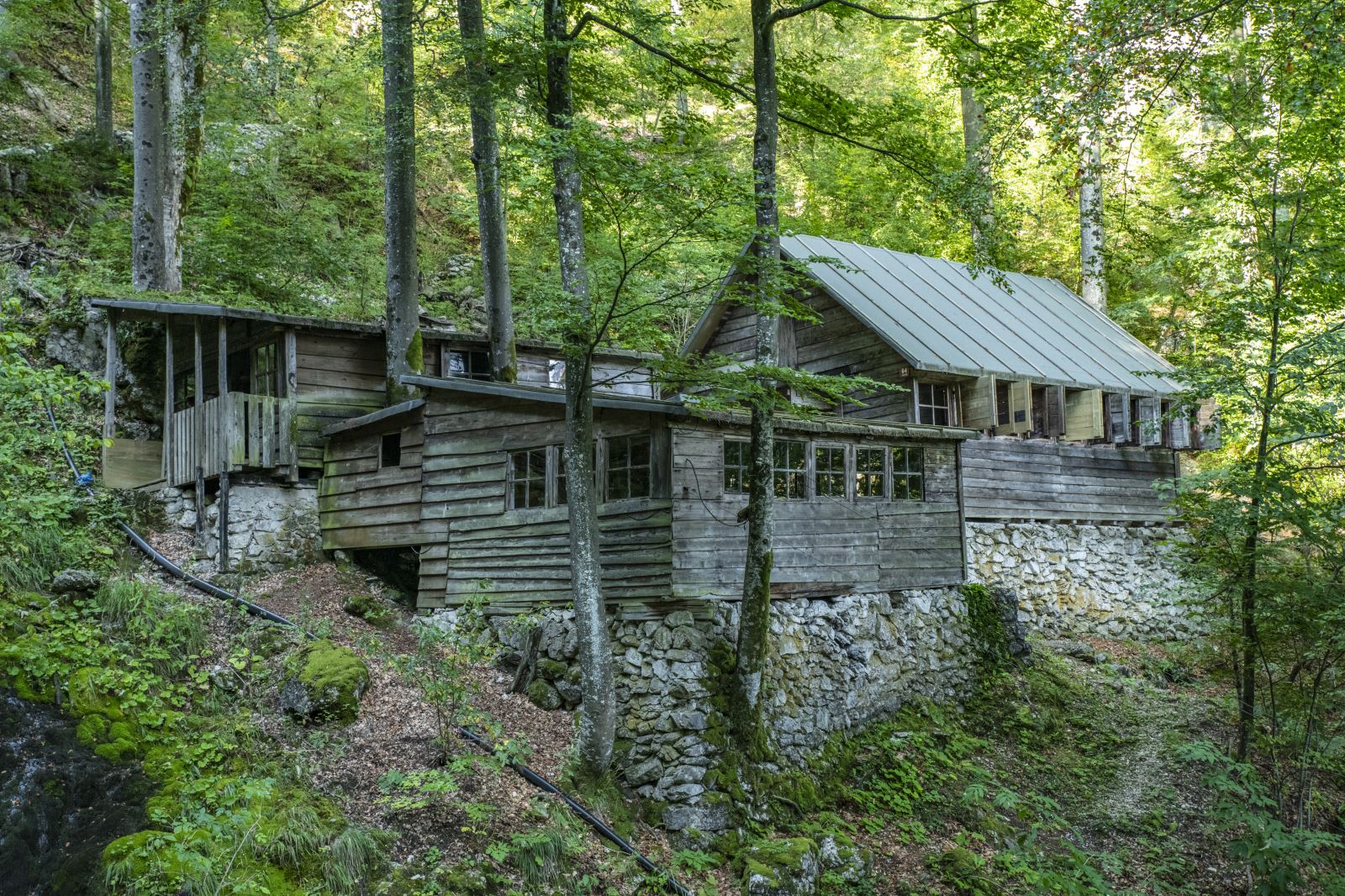 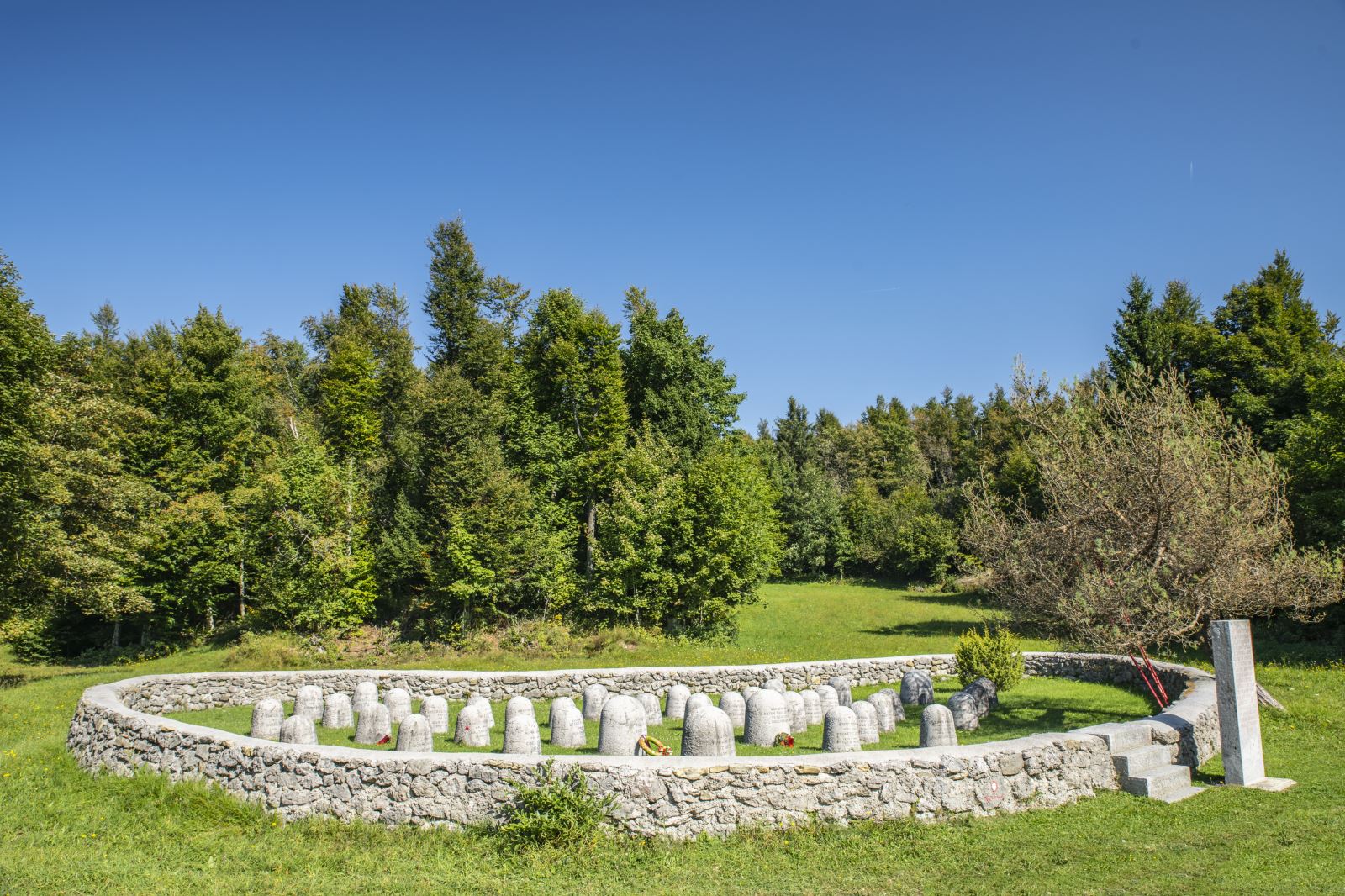 An after-war cemetery for the soldiers who fell in the wider region of Vojsko, Trnovo Forest, and Idrijske Krnice between 1943 and 1945.

The cemetery is enclosed by a low wall and has tombstones shaped like lead bullets. The names of those buried are inscribed on the bullets. In front of the cemetery is a stone obelisk with an engraved dedication.

On the fatal 16 December 1944, the Fifteenth Air Force with 600 B-17 and B-24 bombers flew towards several targets in Germany. The attack encountered no difficulties as the day was cloudy and they managed to almost completely avoid Flaks and anti-aircraft grenades. The only plane that was hit above the target was the plane that later ended its road close to Dole. The German counterstrike managed to perforate the fuel system in several places; the leakage was too substantial, and after crossing the Alps, the motors of the plane stalled.

All 11 crew members jumped out of the plane before it crashed. They were kept in captivity until the end of the war and then they returned home safely. 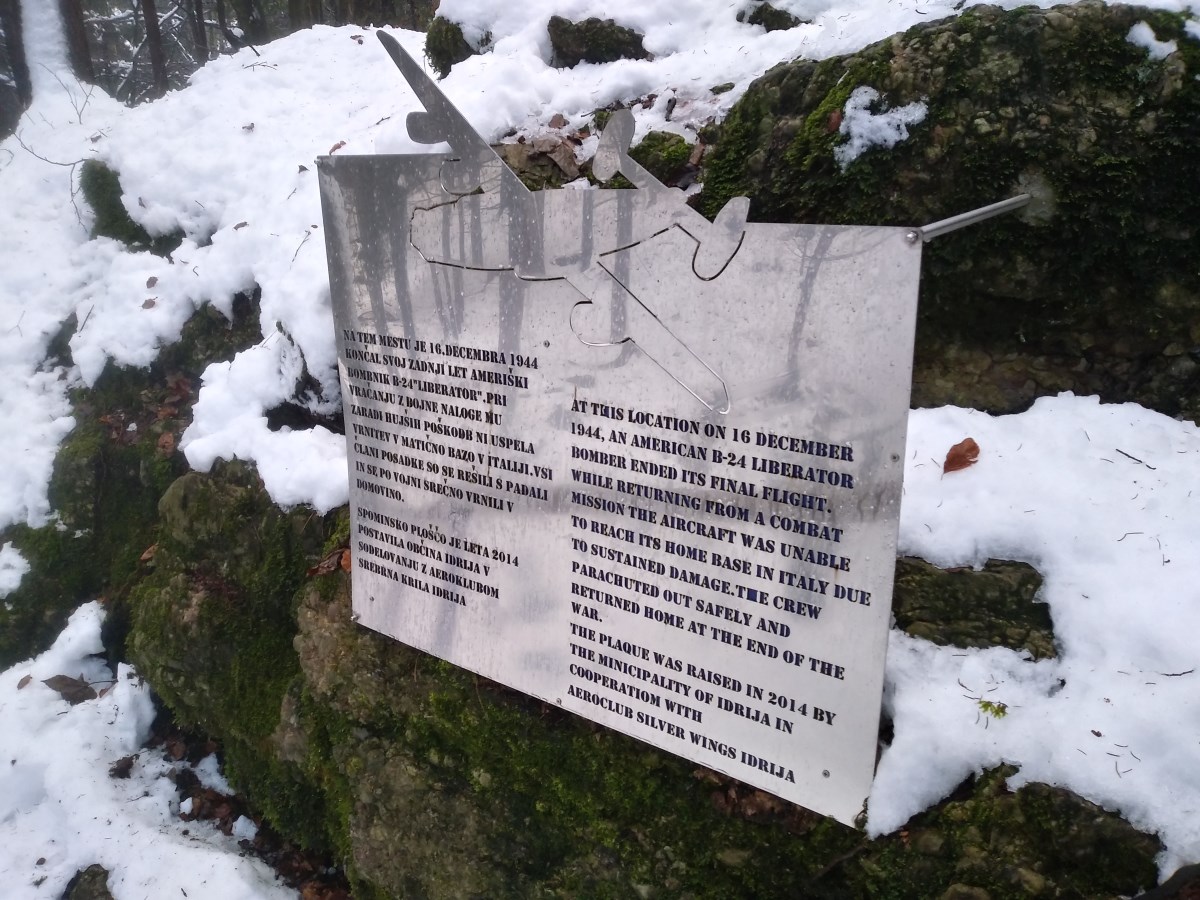 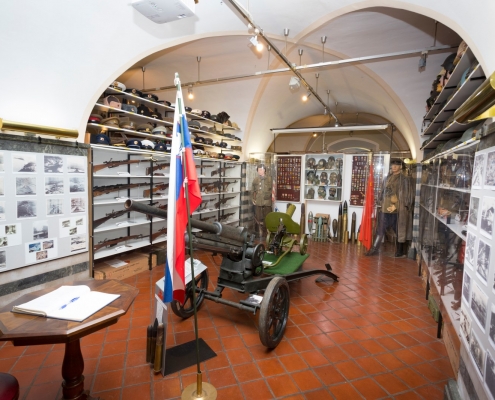 The museum houses objects that were in war use from the First World War to the Slovenian War of Independence in 1991. It includes 45 soldier mannequins in original uniforms and over 100 types of arms used in combat. The visitors can see documents, photographs, and decorations of locals who left an imprint on the recent past.

The war museum holds more than 2000 pieces of military equipment and remnants from the First World War with the emphasis on the rear and the narrow-gauge railway. The title of the exhibition “Not to Forget” wishes to preserve our heritage, show the senselessness of war, and warn our generations from letting history repeat itself. 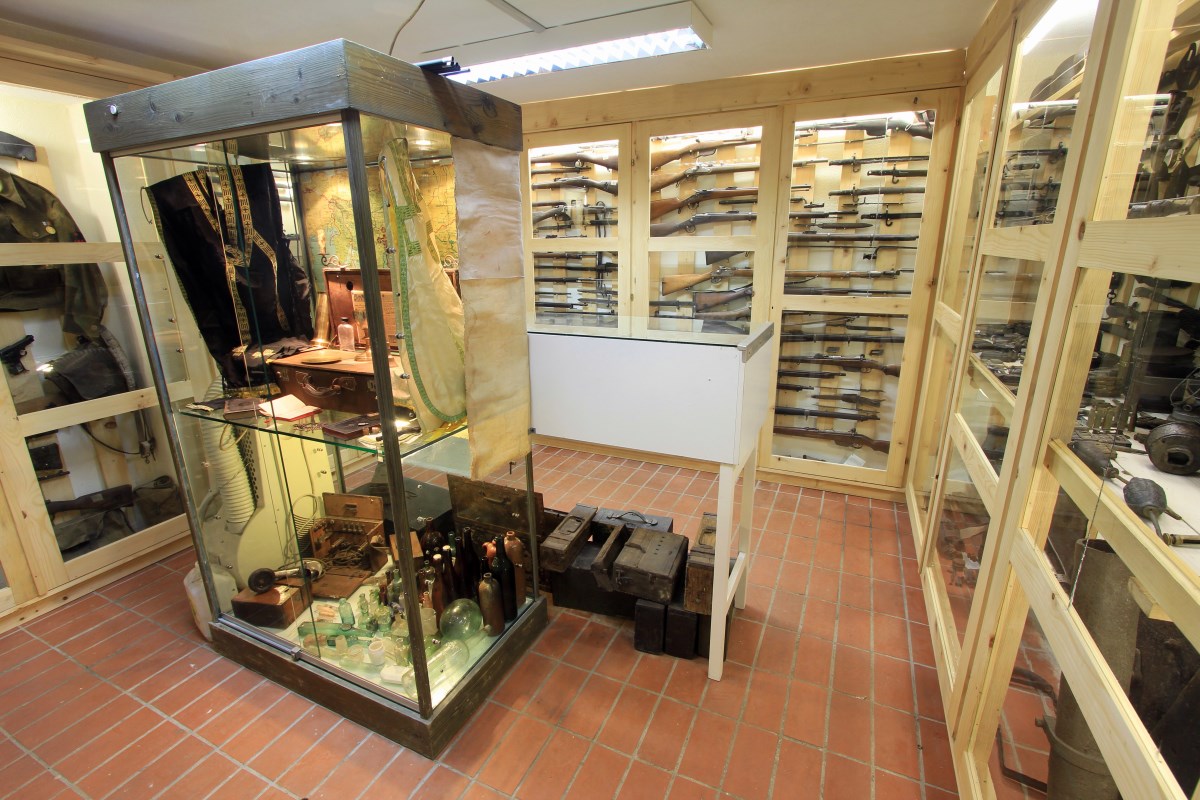 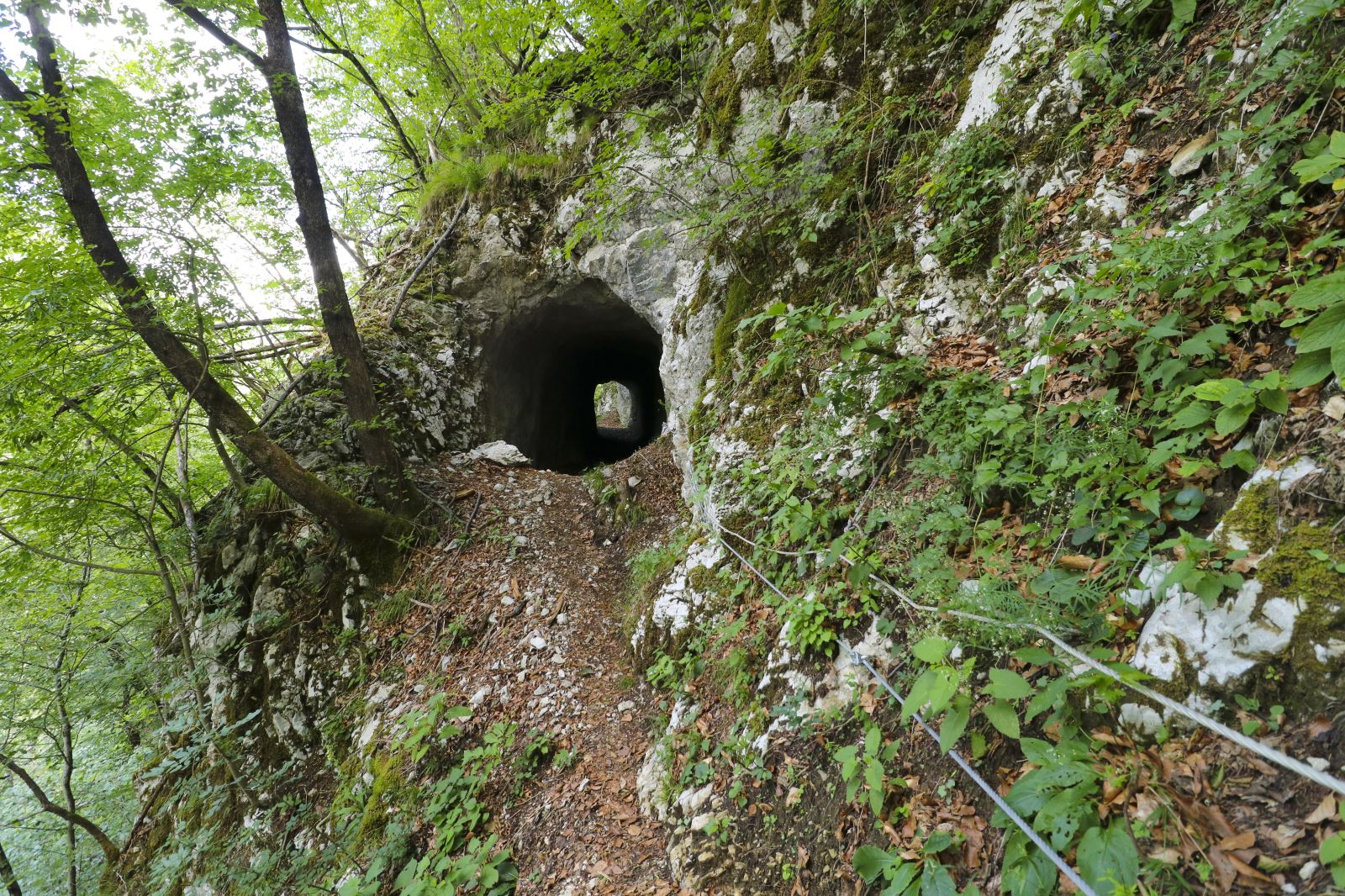 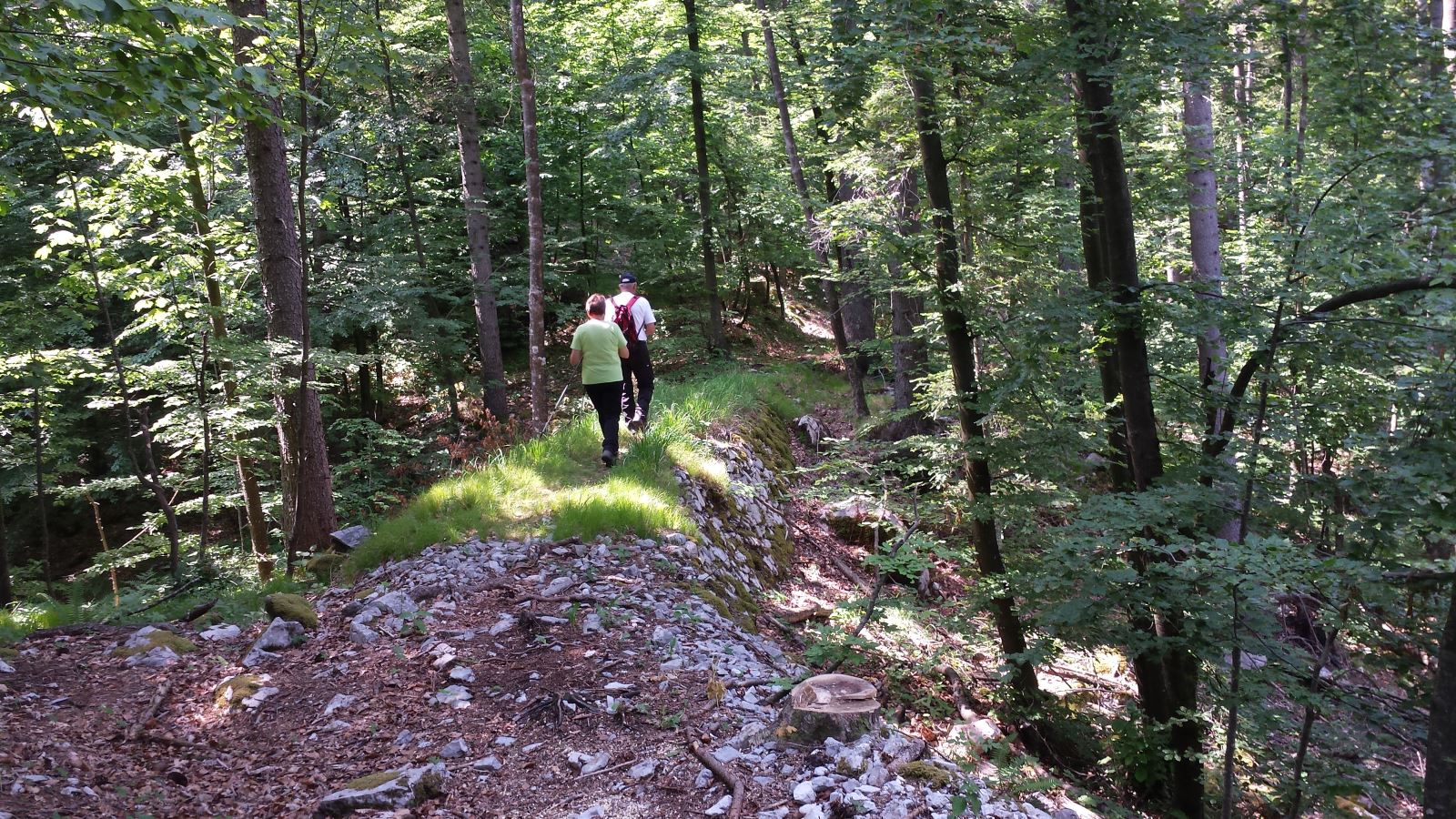 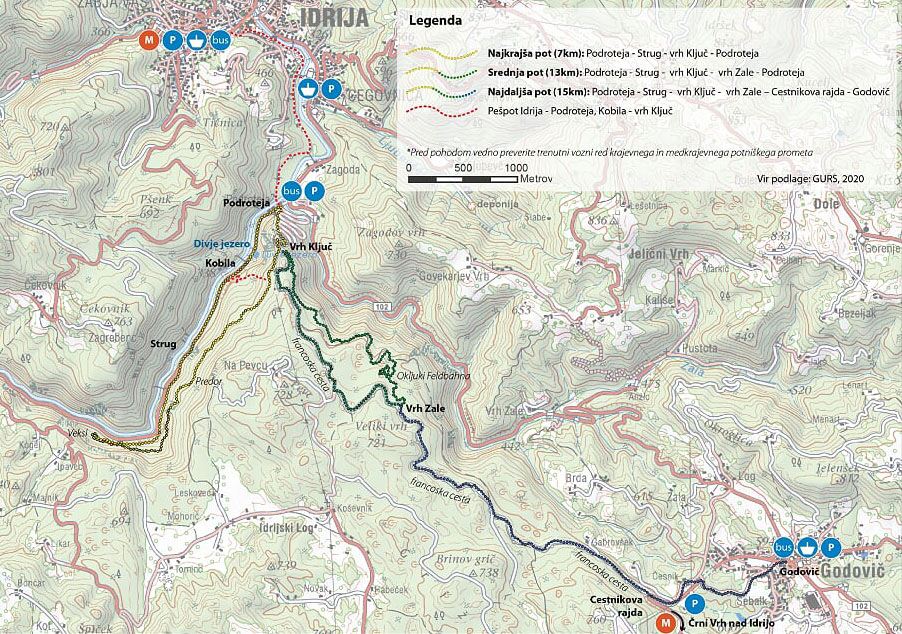 Idrija has always strived for a railway connection to the world but only got it during the First World War – and even that for a very short time. The basic purpose of this railway was supplying the Isonzo Front, which is why it went – more or less by coincidence – through Idrija and to Dolenja Trebuša.

After the 6th Battle of Isonzo with Gorizia falling in August 1916 and the supply of Austro-Hungarian army via the Bohinj Railway was cut, the battlefield supply went mostly from Logatec under the Banjšice Plateau and along the Isonzo (a part of the battle line between Gorizia and Tolmin). To enable it, a prefabricated railway called feldban (from German Feldbahn) was rapidly laid on the existing roads from the Logatec railway station to Godovič, and then further on to Črni Vrh, through Zadlog and the wide forests of the Trnovo Plateau towards Lokve.

Between 1 and 20 September 1916, a similar narrow-gauge railway leading towards Idrija was laid, too. Here, several kilometres of the tracks had to be made anew as, in places, the existing “French Road” was too steep and had too many hairpin turns. Just before the Battle of Caporetto at the end of October 1917, this railway fork was extended to Dolenja Trebuša, where the cargo was transloaded onto cableways.

It was quickly clear that narrow-gauge railways would not sufficiently supply this part of the front and a standard track running from Logatec to Črni Vrh and onwards to Col and Ajdovščina was immediately began being traced. Ground works on the terrain began in early 1917, and by October, the majority of works in the Logatec–Kalce section were done (the Naklo and Kalce tunnels, the military railway station west to the Napoleon Avenue in Dolnji Logatec, embankments, and cuttings). The section towards Godovič was only partly finished (cuttings, embankments); both tunnels (160 and 380 m in length) were broken through and partly completed. This extensive work was finished in such a short period of time on account of war prisoners, mostly Russians. There were supposedly around 20,000 of them, with the same number of horses working, too. The prisoners were installed in war barracks in various places – wherever the needs occurred.

The Idrija section of the railway forked out at the Cestnik Turn south of Godovič, ran on the French Road for a little over 3 kilometres, and then ran over new terrain down the steep slopes and rock walls above the Zala Valley. On top of the Ključe Road above the Wild Lake, the railway crossed the French Road over a bridge and turned towards the Bela or Idrijca River Valley. To reach the turning point where the trains changed direction above the Strug Valley, a 25-m tunnel had to be drilled into bedrock and immediately after it, a gallery was built in the same length. Right before the Battle of Caporetto, a semi-circular wooden bridge was constructed at the turning point which probably largely improved the openness of the track. From there on, the tracks drop for another 50 metres in altitude, reaching the road to Idrijska Bela around a kilometre before the Wild Lake.

The entire length of the feldban with both forks, i.e. the one leading through Črni Vrh and the Trnovo Forest towards Lokve, and the one through Idrija to Dolenja Trebuša, was exactly 100 km. On this narrow-gauge railway, the carts were first driven by horses and later by small locomotives.

Italy conditioned its involvement in the First World War on the side of the Triple Entente with areas of South Tyrol, former Austrian Littoral, and Dalmatia that were to become Italian in case of victory. This was granted with the Treaty of London, while it gained the right to occupy with the armistice signed between Italy and Austria-Hungary on 3 November 1918. Along with the Littoral, Italy also occupied parts of Carinthia and Carniola and did not retreat from several smaller areas until the Treaty of Rapallo was signed on 12 November 1920. This moved the 250-km international border between the Kingdom of Serbs, Croats and Slovenes (later Yugoslavia) and the Kingdom of Italy on the ridgeline between the Black Sea and the Adriatic Sea, dividing the Slovenian nation and its territory. The border was only officially moved to the edge of the Po Valley when the Paris Peace Treaty in 1947 was signed.

In the 1920s and 1930s, Italy began systematically designing and building defence works along its entire land border and officially began reinforcing the Alpine Wall in 1931. Since 1924, military barracks were being constructed in every major town and, in 1933, they also began building underground fortifications to close passage towards the mainland. The defence system became operative after 1936, it was being upgraded until 1943, and used until well after the Second World War, until 1991.

In the area of the Idrija and Cerkno municipalities, there are several defence groups of the Alpine Wall with the common task of preventing the passage across Hrušica and the Trnovo Forest towards the Vipava Valley, or via the Idrijca River Valley to the Isonzo River Valley. The defence groups were positioned at Godovič, Črni Vrh nad Idrijo, Zadlog, Podroteja near the Wild Lake, Idrija, Spodnja Idrija, Želin, around Cerkno, and on Mount Porezen, while the space between them was filled with various temporary defence works and permanent rear artillery positions that are most well preserved in Idrijske Krnice. The majority of the defence groups were named twice – first after the near-by places, and second after fallen Italian soldiers and officers of the First World War. Directly on the border line, there was also a system of small barracks connected by numerous new roads that enabled the army to move around the area uninterrupted. 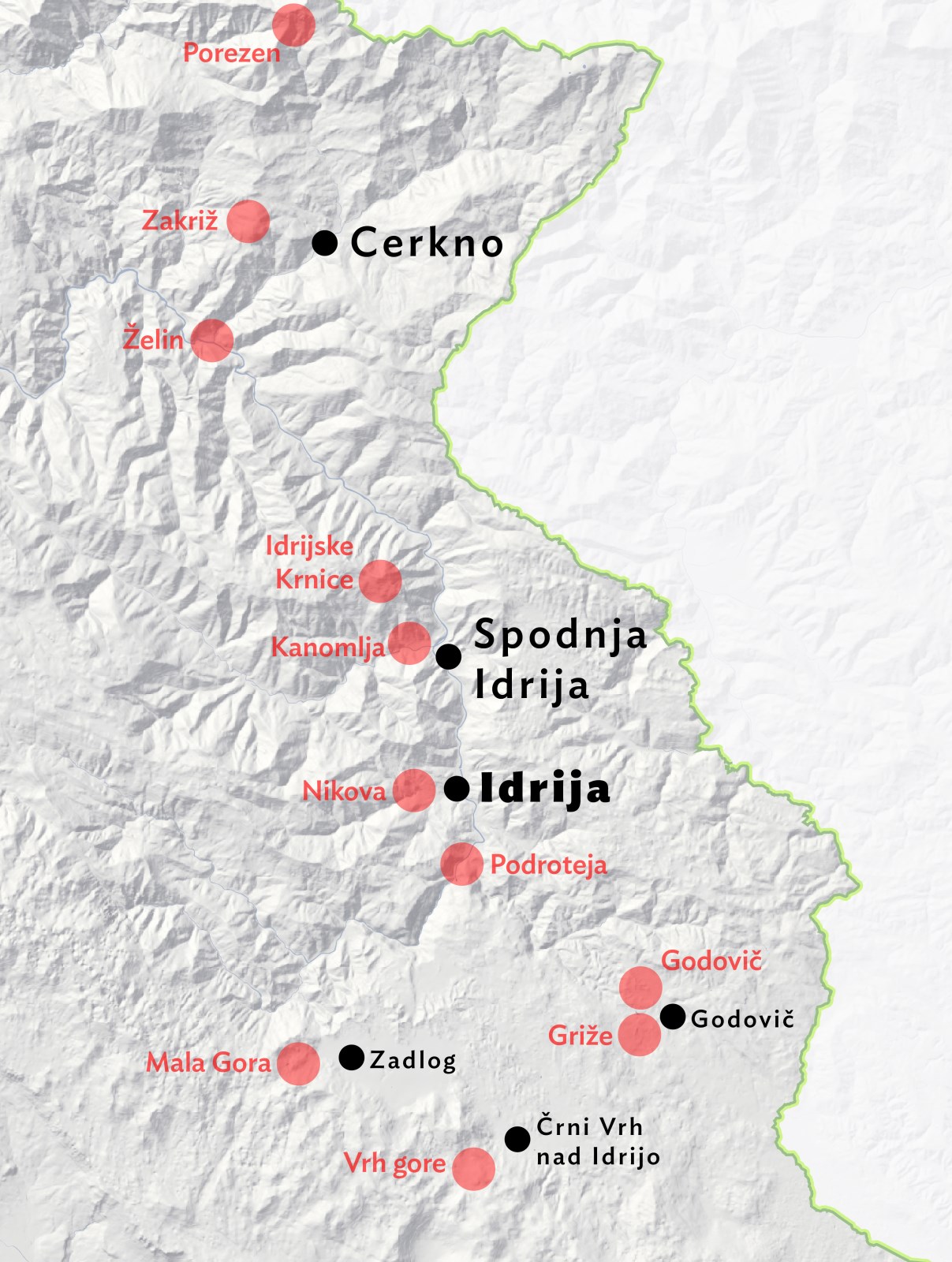 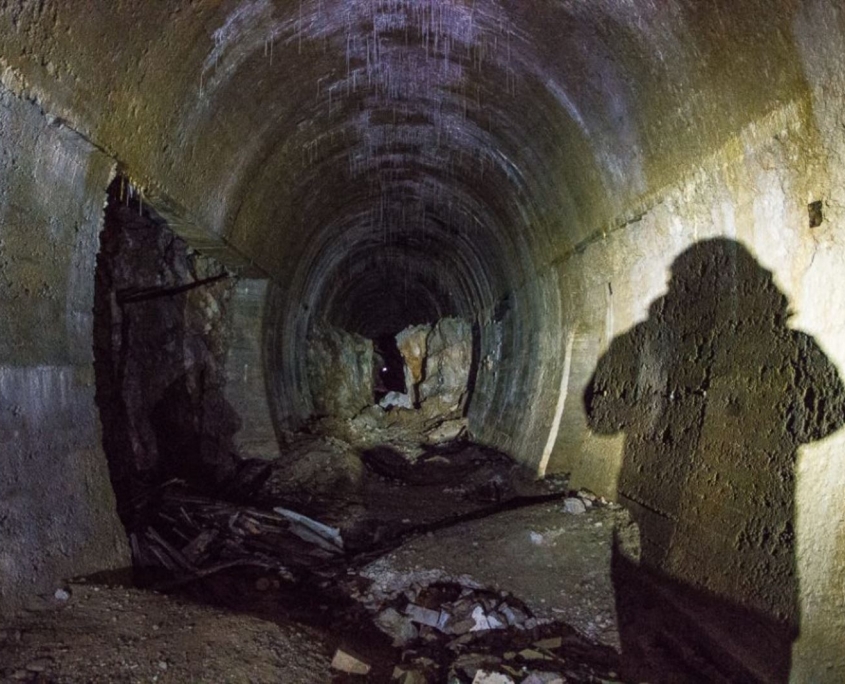 Close to the international border crossing at Hotedršica, the Godovič defence group belonged in the first line of defence and was composed of five underground fortifications, one of which was also equipped with two Nordenfelt anti-tank guns. When building them, they made use of the almost finished railway tunnel dating back to the First World War and constructed an underground fort with a steel dome at its northern entrance. Similar fortifications can be found also in other defence groups. At first, this defence group only prevented passage towards Črni Vrh nad Idrijo. Shortly before the war, new works began being built above the road towards Idrija, but they remained unfinished. 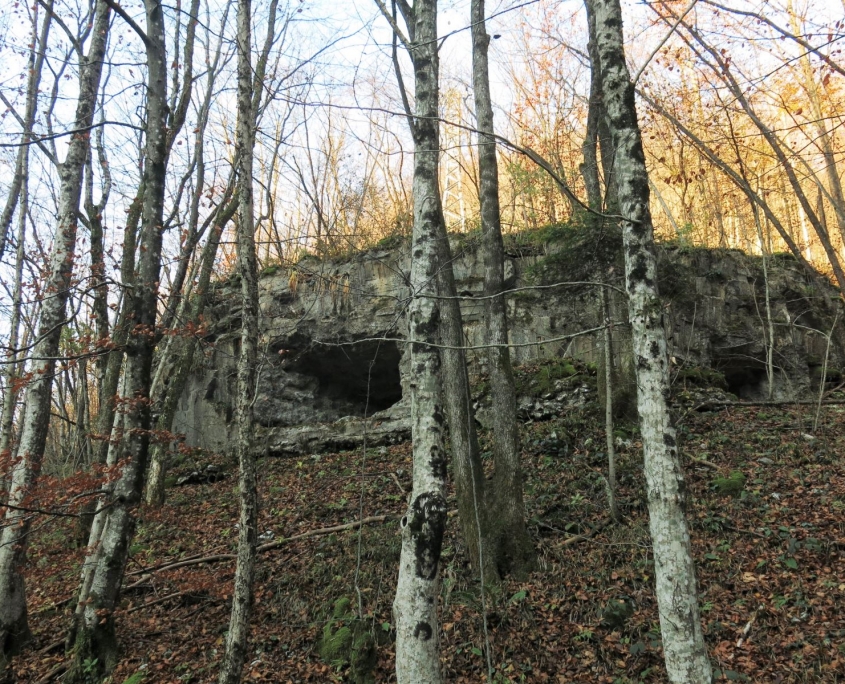 At the Idrijca and Zala confluence, there was the Podroteja defence group of the Alpine Wall that prevented passage from Idrija or Godovič towards the Upper Idrijca Valley and onwards past the Putrih klavže towards the Trnovo Forest. Passage is blocked by three underground fortifications, anti-tank obstacles and anti-tank gun positions, as well as an observatory and shelters higher above the valley. One of the rear shelters is located just next to the Wild Lake. After the Italian tradition, defence groups were named after the fallen soldiers of the First World War; in this case, this was Guido Pellizari, a gunner, who died in November 1915 at Farra d’Isonzo. 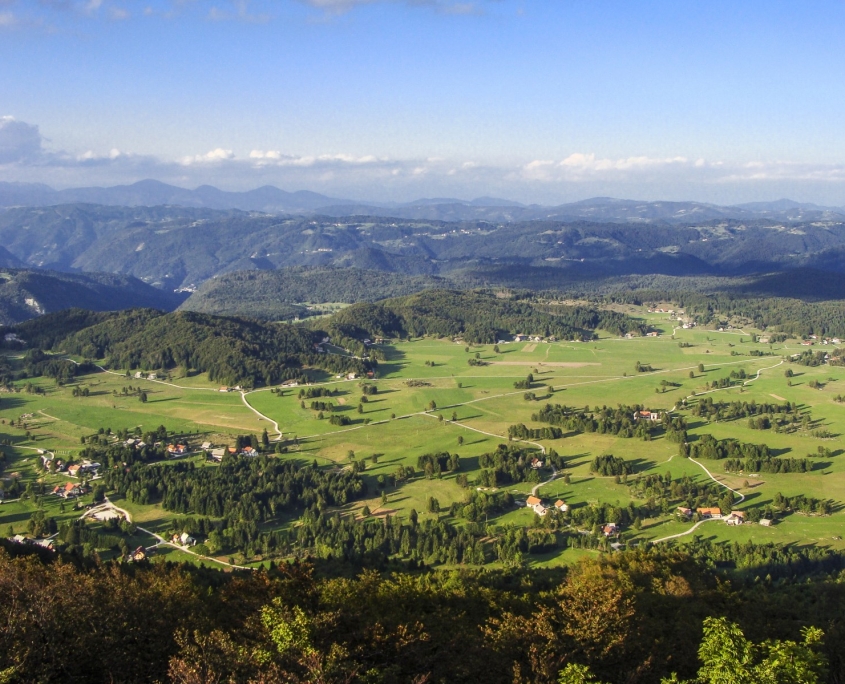 A total of six underground fortifications in two defence groups and a number of underground shelters, gun positions, barracks, and trenches closed the road passages towards Col and the parallel smaller road towards Otlica and Predmeja. Today, the largest of the fortifications is flooded as it serves as a water tank on this Karst plateau that is otherwise fairly dry. The central defence group is located at the very top of the pass and was named after Ferruccio Tromba, Italian general who died in November 1915 at Oslavia near Gorizia. 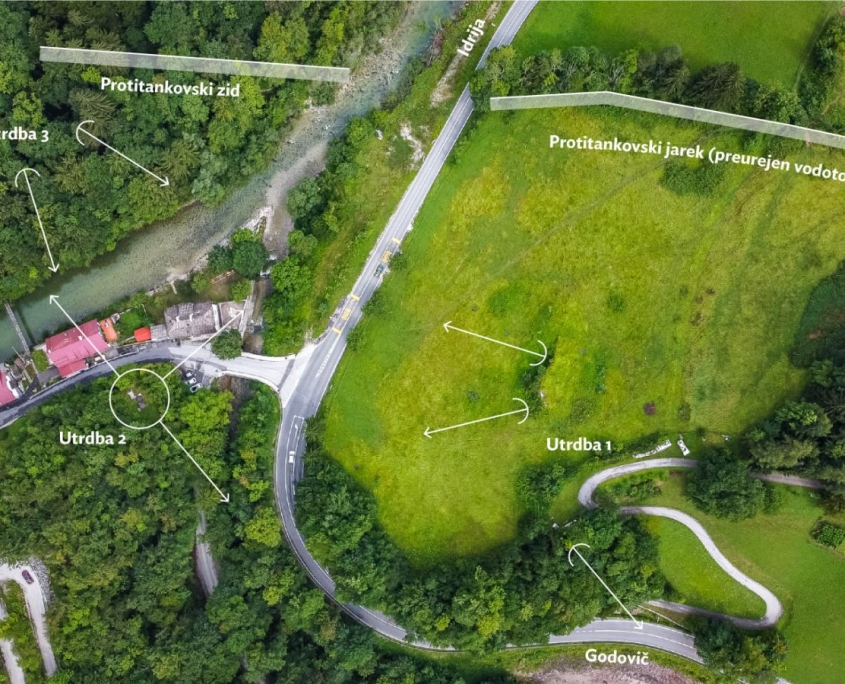 Idrija Barracks and Defence Facilities at the Nikova Creek

With the Italian occupation and the confirmation of the new border, Idrija became one of the commanding centres and its barracks was among those with the highest number of soldiers on the Rapallo Border. Today, the Costantino Brighenti barracks that was officially opened in 1933 houses the Idrija Psychiatric Hospital, while the town itself features several buildings that were once headquarters of other border- and state services. The defence group on the Nikova creek was composed of three underground fortifications and closed the valley passage towards Vojsko. In case of a combat, Idrija would be destroyed as the attacker would have to advance through the town centre to reach the fortifications. The defence group was named after Valentino Cudrig, a Slovenian from Italy. 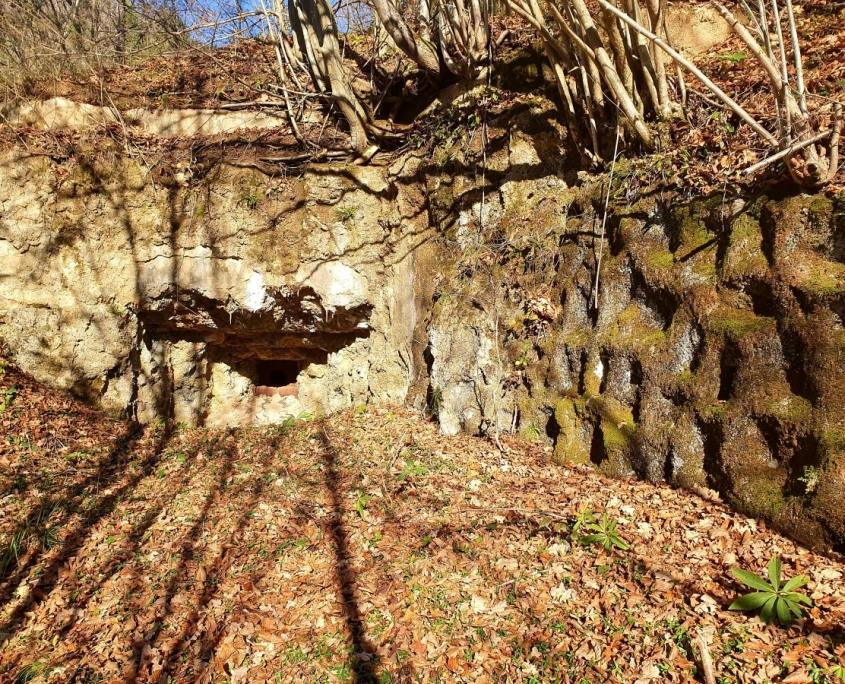 Just like in Idrija, Spodnja Idrija had a defence group of three underground fortifications located close to the barracks – today’s industrial zone – that defended passage up the Kanomljica Valley towards Oblakov Vrh, Dolenja Trebuša, and Most na Soči. In the rear of the defence group, the road forks to the central permanent artillery battery in Idrijske Krnice. The defence group here was named after Luigi Bevilacqua – posthumously decorated second lieutenant engineer who died in February 1918 close to San Dona on the Piava River. 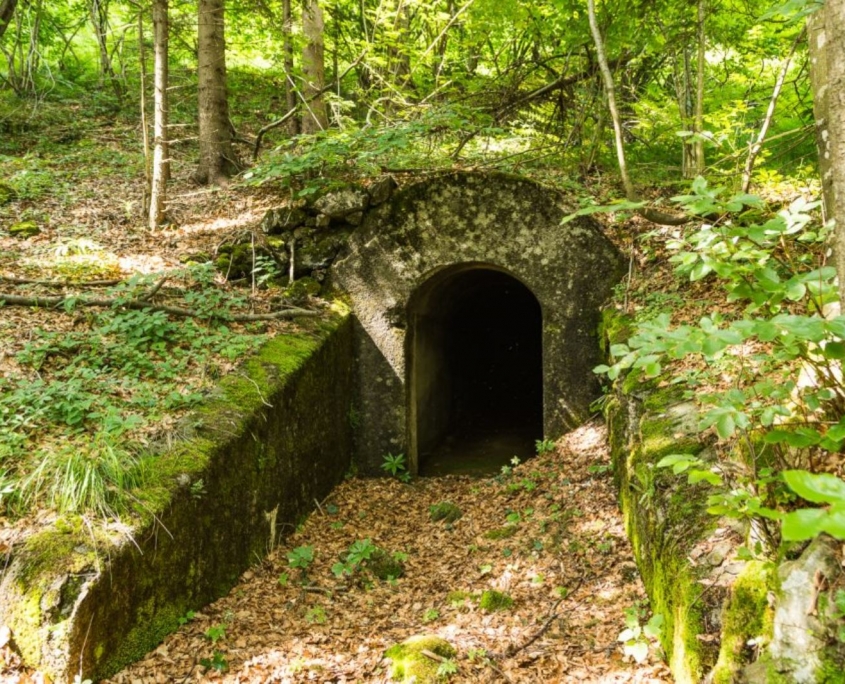 Although Jelenk is quite remote, the royal Italian army used its hight and views to its advantage. In late 1930s, it positioned an artillery battery of the border patrol units (GAF), while its pre-prepared artillery positions, shelters, underground depots and artillerists’ housing are still visible today.