The Idrija Geopark is characterized by complex geological structure, but is also one of the most well-researched areas of Slovenia. A wide range of geomorphological, karst and hydrological phenomena tells a story of the origins of the Idrija region, 340 million years ago.

The Idrija mercury ore deposit originated 238 million years ago when hot solutions (160–210 ˚C) bubbled from the depths to the surface and brought mercury along with it. On their way to the surface, they converted older rocks into ore. Cinnabar ores originated at the same time as the rocks in the ore generation period. The cinnabar mineral is one of the forms of mercury, the second being elementary mercury. Both forms can be found in the Idrija mercury ore deposit – in terms of the quantity of mercury, it is the second largest in the world. Mercury is extremely pure and frequently occurs as drops of elementary Hg. In terms of its origin and geological structure, the deposit is extremely complex, and as such, it represents a globally relevant natural monument. Its special status is warranted by the diversity of cinnabar ores that can be found in the area.

Anthony’s Mine Road is the oldest preserved part of the deposit still accessible after the closure of the mine. Today, it is a tourist attraction that features an impressive range of geological phenomena with elementary mercury and presents the methods of ore extraction used throughout the history of the mine. 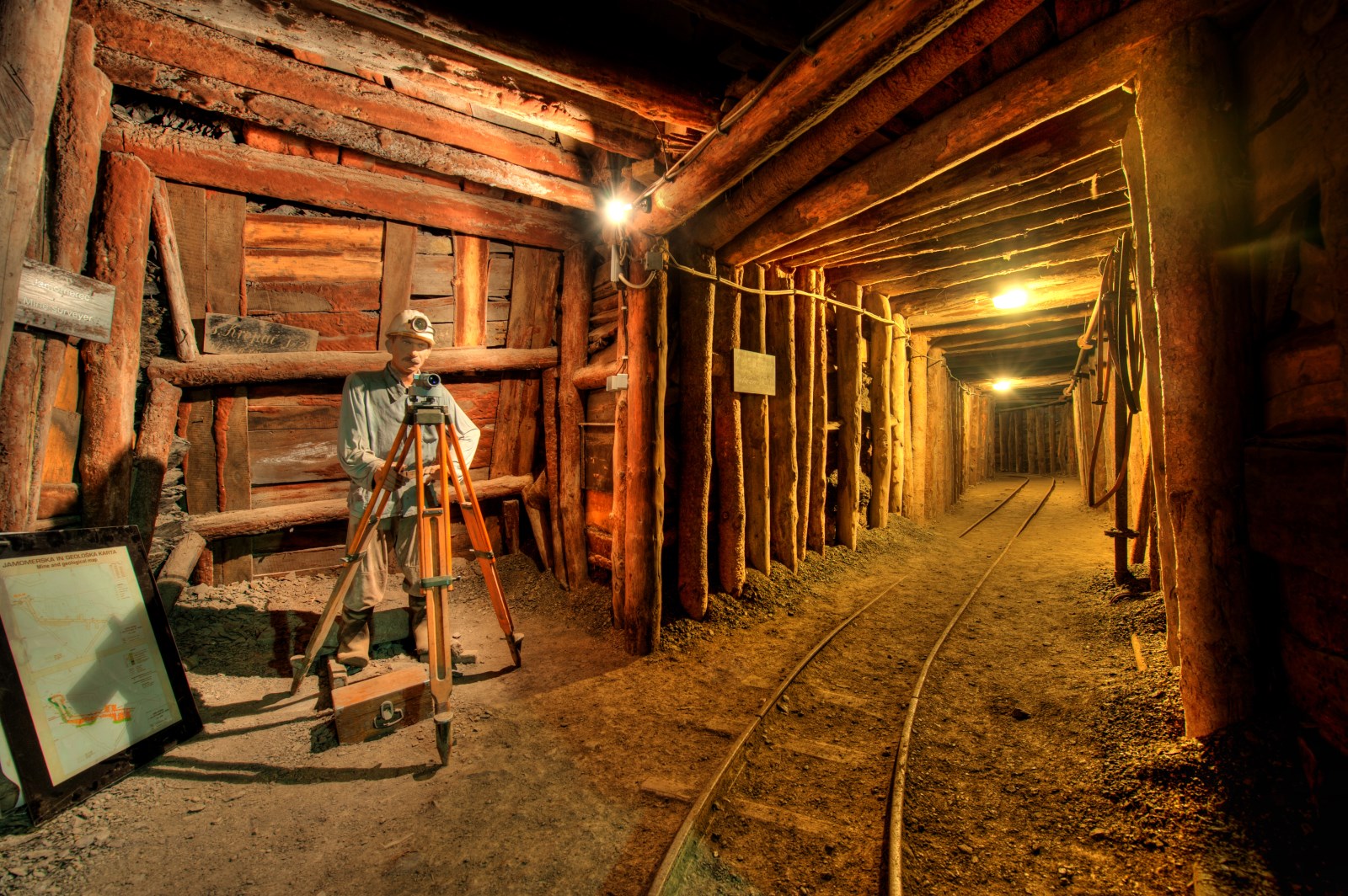 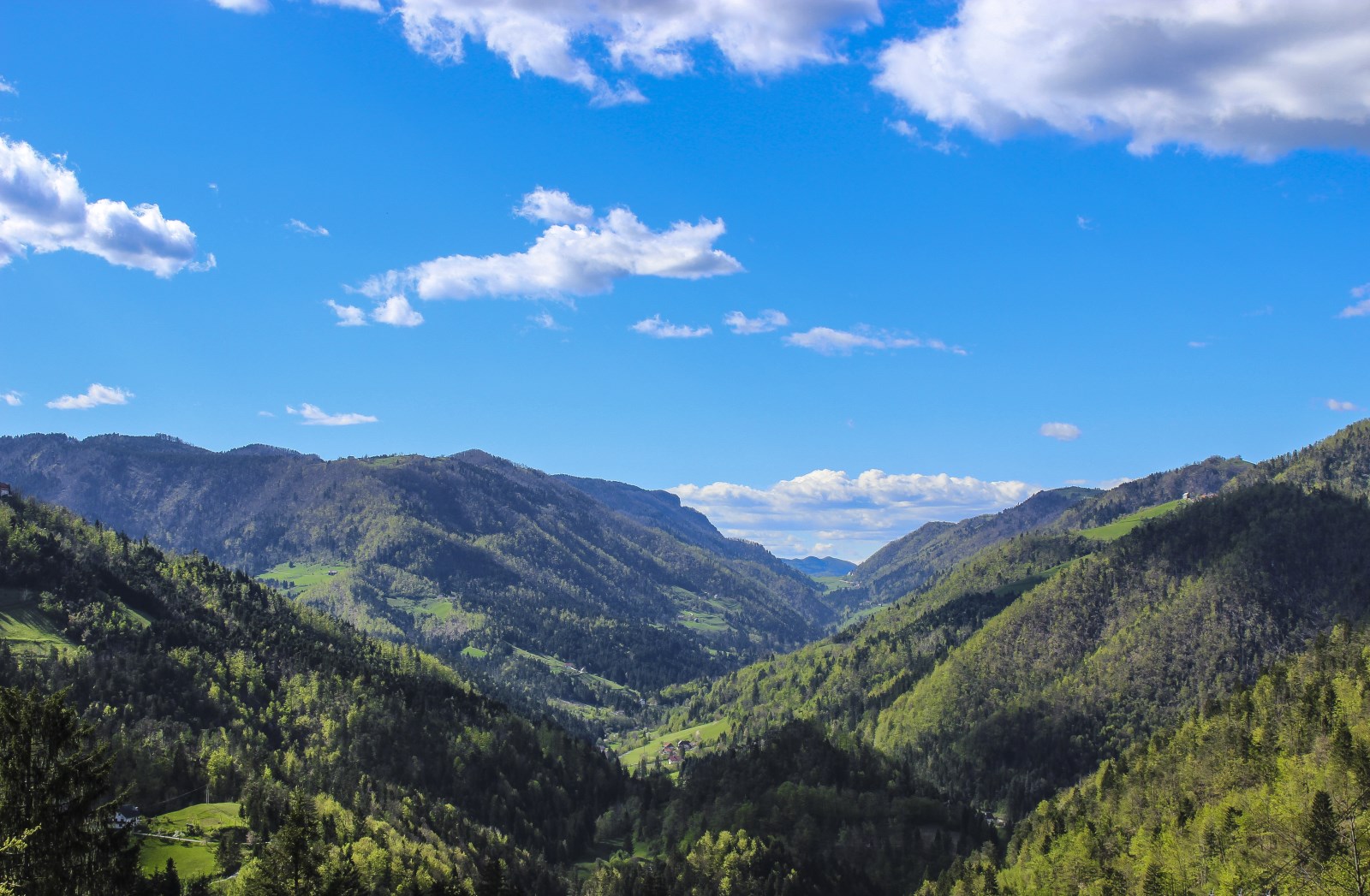 The Idrija Fault is one of the largest faults in the southern Alps and can even be seen in satellite images. It reaches Slovenia from Resia and runs through the valleys of the rivers Učja, Soča, Idrijca, Hotenja, and Kanomljica, through Idrija and Godovič and across the Planina, Cerknica and Babno fields towards Prezid, continuing towards Croatia. It is classified as one of the Dinaric faults that run through the territory of Slovenia in a northwest-southeast direction and represent the youngest structural elements in this area as they form dip-slip faults with all older tectonic structures.

The mercury ore deposit features a total horizontal slip of 2,414 m and a vertical slip of 480 m. The fault has a very steep descent to a depth of 14 km.

Currently, the slips along the Idrija fault are dextral strike-slips (the points follow a right-lateral motion according to the observer’s point of view from the opposite side of the fault). The Idrija fault is said to have been the location of the strongest earthquake in Slovenian territory in 1511. Today, it is not among the most seismically active Slovenian faults, but is still active. Scientists have calculated it has an average annual slip of 0.10 mm.

Tectonic windows can be seen in areas where several nappes and thrust slices are sequenced on top of each other. A tectonic window is part of a younger base and is an exposed area in a thrust block of rocks. It is generated through erosion, which cuts deep into the nappe (the block of rocks) to expose the underlying material. Tectonic windows are characterized by younger rocks within and older rocks without. In the contact between rocks, the younger rocks are positioned under the older rocks. Windows can vary greatly in size, ranging from several meters to several hundreds of kilometers.

At the bottom, the Strug tectonic window exposes Lower Cretacious limestones and Paleocene-Eocene flysch rocks of the Hrušica nappe, with an overlying plate of Lower and Upper Cretacious limestones of the Koševnik thrust slice. The Idrijca River has eroded so deep into the overlying Koševnik thrust slice to expose the youngest Paleocene-Eocene and Lower Cretacious rocks of the underlying Hrušica nappe, which extends across several kilometers into the Idrijca River Valley in Strug, where typical contact between rocks can be observed. 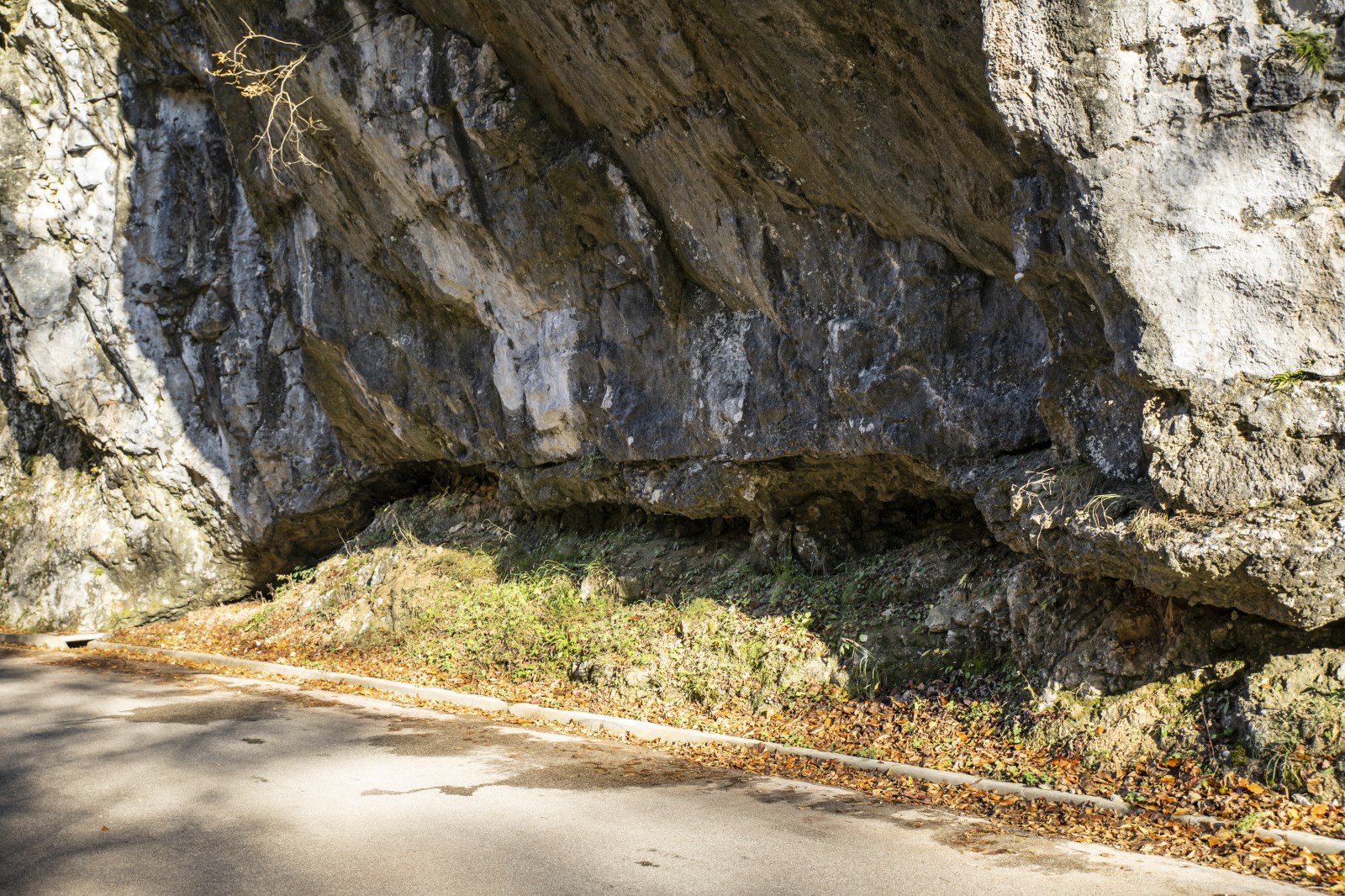 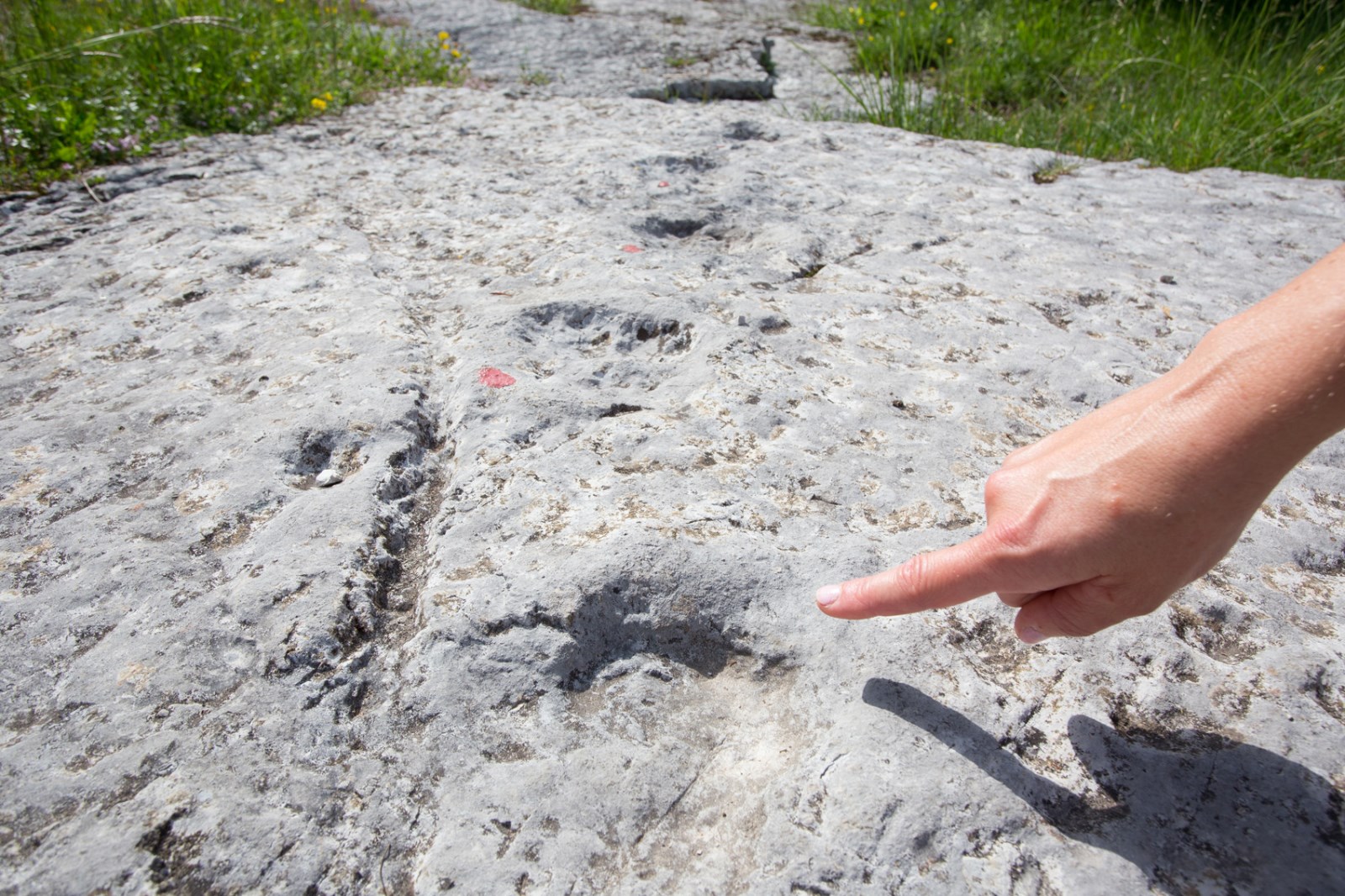 Near Godovič, six well-preserved footprint fossils can be seen. These footprints were made 220 million years ago by a biped dinosaur walking in soft ground on the shores of a tropical sea. The fossil footprints alone are not enough to identify the exact species of the dinosaur, but it is assumed that the footprints were made by either a plateosaur (Plateosauridae) – one of the first dinosaurs – or a phytosaur (Phytosauria), a relative of modern-day crocodiles.

The footprints were quickly covered by other sediments such as mud and sand, possibly because of storm waves. Further geological processes changed the sediment into rock. Through millions of years, tectonic forces have brought the rocks with the footprints closer to our area and lifted them above the sea.

Geological processes which have eroded and corroded rocks have made the fossil footprints visible on the surface.

Tomaž’s table is located near the village of Ravne pri Žireh and is a large, natural stone plate lying atop of a narrower stone pillar. The stone plate is completely separate and is only in contact with the pillar in a single point. It originated as a series of geological coincidences that took place through a period of 240 million years and created the conditions for its formation during a period of limestone mud sedimentation with intermittent layers of clay from dry land brought on by storms. Two layers of limestone were thus formed and later converted into dolomite. Nestled between the two layers was a layer of shale. The dolomitization process (i.e. the conversion of limestone to dolomite) caused the lower layer to be less resistant to the elements and the upper layer to be more resistant. In later geological periods, the upper layer was shaped through tectonic shifts with faults in different directions. Covered in other layers, it waited for tectonic forces to lift the Alps and the other layers towards the surface. Its final form was shaped by atmospheric influences through erosion and corrosion. 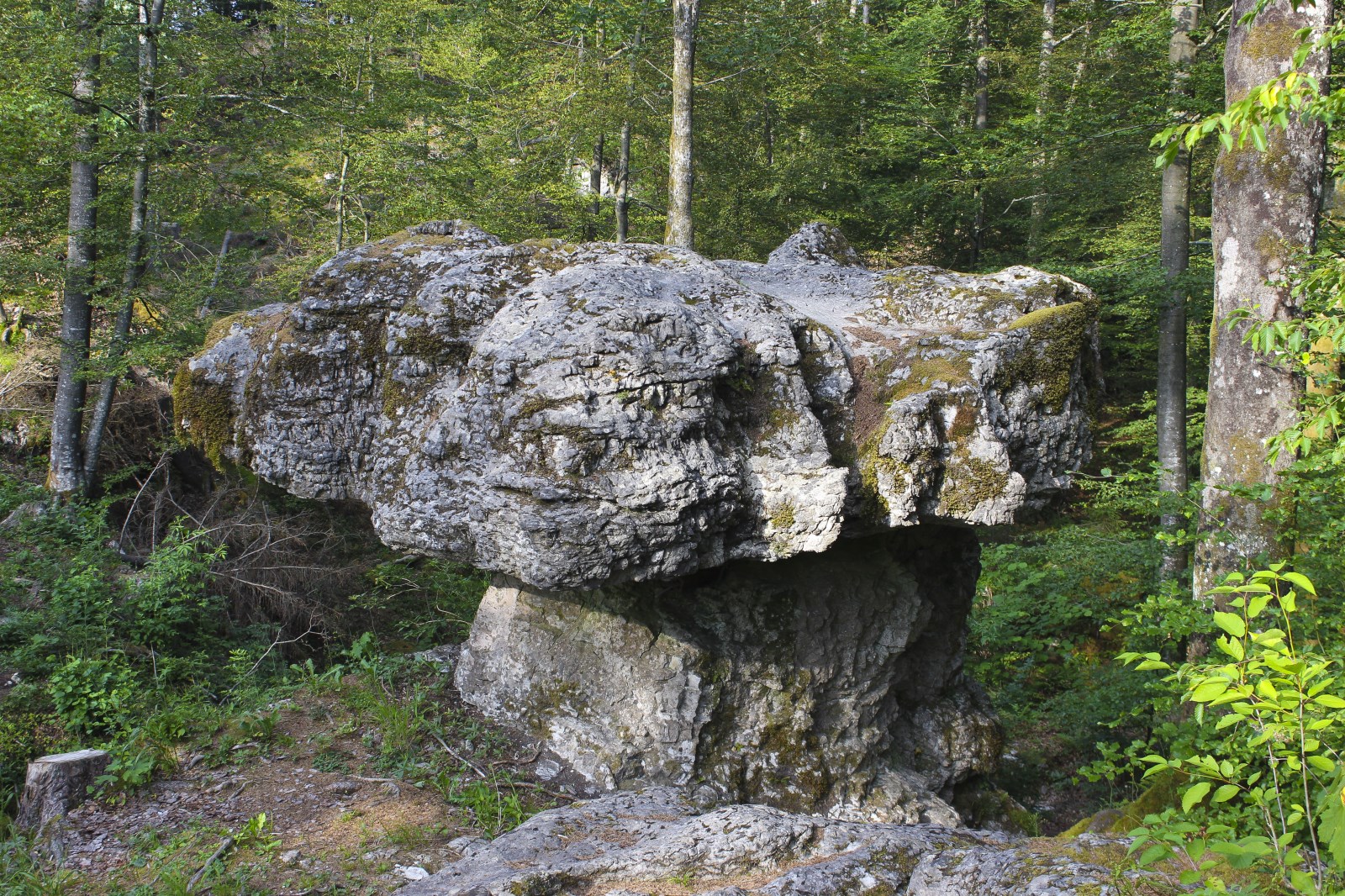 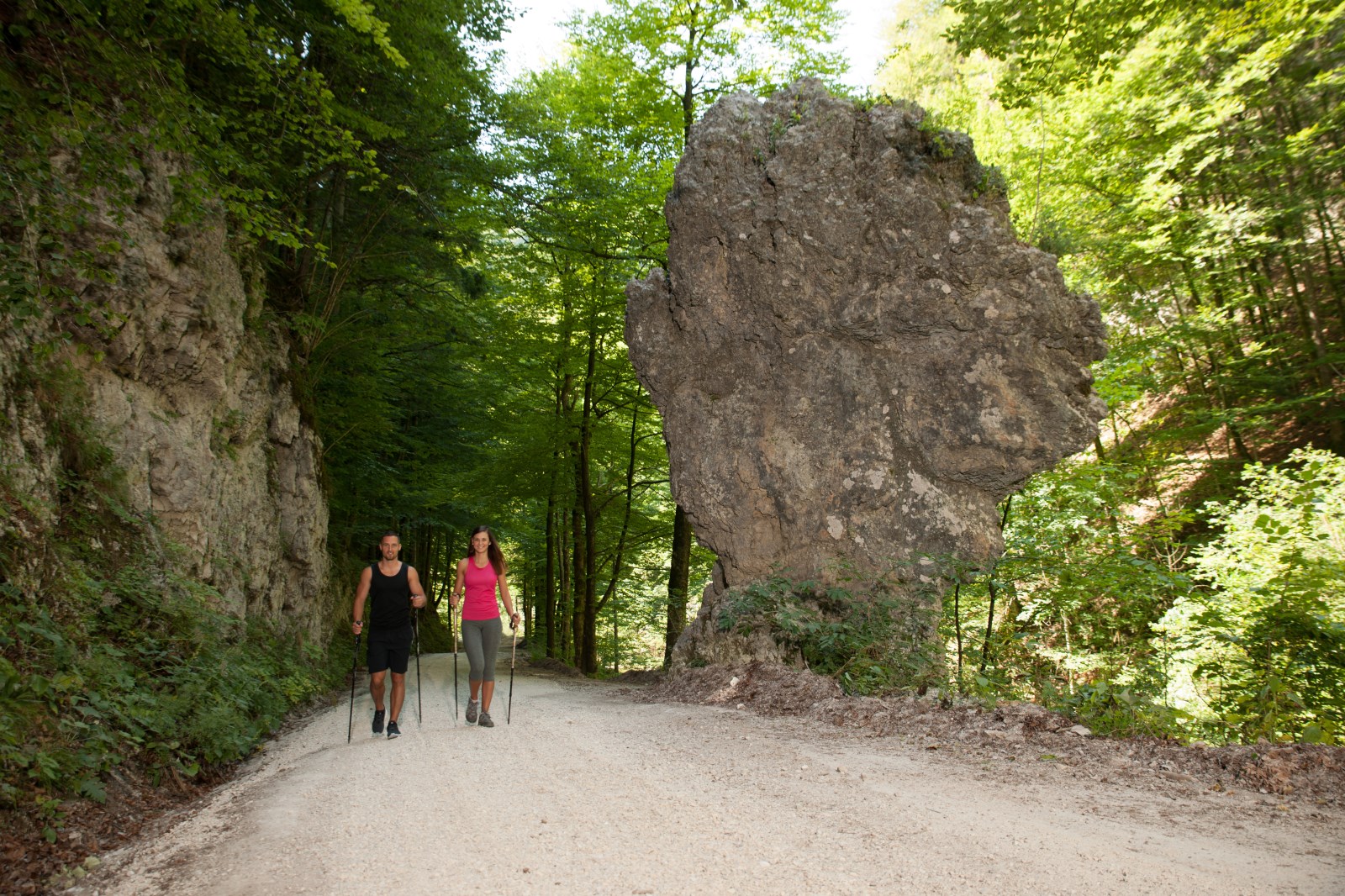 The Hag’s Tooth (Slovenian: Babji zob) is a large dolomite monolith (an isolate) situated in a narrow slope between the Belca River and the road leading from Idrijska Bela to the Brus klavže. It was partly shaped by natural forces when the Belca River eroded the slope by carrying stone blocks and rocks. A part of it was also shaped by human hands during the construction of the road.

It is made of a Norian-Rhaetian stromatolitic dolomite (aged 227–201 million years). Although many would say that bacteria cannot form fossil remains, this rock is proof of the contrary. In the shallow and warm seas of the past, a sequence of intermittent layers of algae and cyanobacteria and sedimentary particles was formed. The rock was formed from these thin layers of bright and dark colors. The sedimentary process in the calm seas sequenced these layers horizontally, and these can also be observed in the vicinity of the Hag’s Tooth.

In other locations around the Idrija Geopark, round-shaped stromatolites can be observed. These are called oncoids. They were formed in tumultuous seas when particles were moved around in the water while bacteria and sediments gathered around the core, forming round shapes.